Pictured is NNAC member Jan Jamrog, being presented the Angler of the Year Award from Karen Jett and Lara Brady Kelley, the owners and publishers, of the Chesapeake Angler Magazine.

This is the third year that the Chesapeake Angler has sponsored the NNAC Angler of the Year contest.  The contest is based on 6 club tournaments held from May to October specifically targeting 7 different species.  Scoring is based on 4 points for a first place, 3 for second, 2 for third, and 1 for any of the specifically targeted species entered during an NNAC tournament.

Jan captured the AOY trophy with a total of 33 points, edging Tom Smith (17 points) of White Stone and Paulette O’Connor (17 points) of Manassas.  Jan managed to score points in all 6 tournaments and fishes out of Buzzards Point Marina off the Great Wicomico River aboard his boat ‘BAY VIEW’.   Most of his life has been spent with a fishing pole in his hand but nearly all of that has been in fresh water until 2008.  That was when he bought his retirement home on the Potomac River in Heathsville and discovered the excitement and challenges of catching migratory saltwater species. 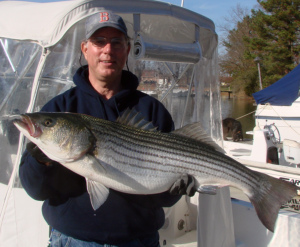 Jan joined the NNAC in order to meet other anglers with similar fishing interest and to help accelerate his salt water fishing learning curve.  He confesses that catching a 25 to 30 lb. rockfish while trolling has been a huge thrill; however, what he really enjoys is casting or jigging in shallow water with light tackle for Speckled Trout, Puppy Drum and other species.  Additionally he tries to learn something new and useful each time out on the water which he has obviously accomplished in 2012!

I am a fisherman.
It is not merely something that I do,
it is who I am.
Fishing is not simply my escape,
it is where I truly belong.
Where I am supposed to be.
It is not a place I go,
but a lifelong journey I am taking.
It is a passage my father showed to me,
and that I will continue to show others.
When you understand all of this,
you will then know me,
and we will fish together.

As we approach the start of a new season, be sure to complete a membership application/renewal and liability form and mail it along with your dues to the club’s mailing address in order to be eligible for tournaments.

Be sure to check out the Reports and Comments tool in the Members Only Section.  It allows you to post messages to the membership. Members can respond. You can use it to report fish catches, sell equipment/boats, ask questions about techniques and other related topics. It is available for you to use.

Always check with the vendor before heading to an event.

Thanks to our Sponsors