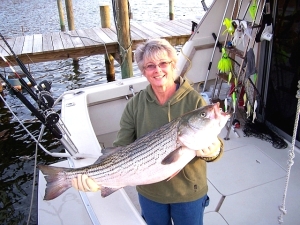 Susan Hudson captured the title in 2011.  She is featured here with a 21 pound striped bass caught on Nov. 19th aboard the KARISMA out of Bridge Creek off the Little Wicomico River.

Susan captured the AOY trophy with a total of 21 points for the 6 tournaments. Scoring is based on 4 points for a first place, 3 for second, 2 for third, and 1 for any of the specifically targeted species entered during an NNAC tournament. Susan would be the first to tell you the real skill is that of the boat’s captain, her husband Bob, navigates to the right locations for the variety of fish she caught during the competitions.

The club, was started in 2004 by Capt. Dave Compton, has more than 100 members with more than half residing outside of the Northern Neck region. The NNAC appreciates the assistance from their sponsors and the 11 different authorized weigh-in stations, where members may register their fish in the NNAC competitions.

I am a fisherman.
It is not merely something that I do,
it is who I am.
Fishing is not simply my escape,
it is where I truly belong.
Where I am supposed to be.
It is not a place I go,
but a lifelong journey I am taking.
It is a passage my father showed to me,
and that I will continue to show others.
When you understand all of this,
you will then know me,
and we will fish together.

As we approach the start of a new season, be sure to complete a membership application/renewal and liability form and mail it along with your dues to the club’s mailing address in order to be eligible for tournaments.

Be sure to check out the Reports and Comments tool in the Members Only Section.  It allows you to post messages to the membership. Members can respond. You can use it to report fish catches, sell equipment/boats, ask questions about techniques and other related topics. It is available for you to use.

Always check with the vendor before heading to an event.

Thanks to our Sponsors